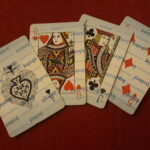 This is more of a parenting post, because I want to remember this thing my kid and I invented during the pandemic. We got kinda sick of all the board games and card games, and we wanted to invent a new one.

Here is how it goes. My memory is kinda,vague but it’s the idea, which you can hack, if you have the kind of child who is like mine and is physically affectionate.

You use the entire deck of cards. Each player draws a card.

Whenever we play games, we hack them, too, because why not? I don’t know if kids do that a lot together. I remember doing it a bit, but not as often as I do it as an adult w my child. But I like this particular game, because we pretty much made it up from scratch. We also invent our own board games sometimes. When she was younger, I had one where if you stop at a blue square you take a sip of water, a pink square you kiss someone, a green square you sing and.. I can’t remember what you did on the yellow squares now!

I wonder what kinds of games ppl invent with their kids, card games or otherwise.