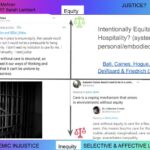 The recent equity/care model Mia Zamora and I came up with for our #OpenEd20 keynote, which builds on a Twitter thread I started originally to prepare for my Media & Learning conference invited talk, is for me evidence of how you can indeed leverage Twitter for educator wisdom, and build on the ideas of living humans, expressed in bite-sized tweets, to theorize a model that can be useful to people.

[I will not apologize that I built this model entirely on the tweets of people without doing background research – there is probably some stuff about this in the literature – when it’s time to publish it in a peer reviewed journal, I’ll work on the literature part. But I believe so much in the value of the in-the-moment-thoughts of living humans who respond to me on Twitter, and I have noticed more recently that many ppl I don’t know personally are responding to these, so that it’s maybe more of a subset of academics that show “who follows me” rather than “whom I follow”, if that makes sense? I hope that the way we presented our model clearly attributed all the ideas to the people who came up with them, in the slides leading up to the model, and also in the first slide in the model – see the pictures embedded towards the end of this post]

It is extremely difficult to come up with new material for every keynote I’m invited to, often also because they’re very close in time with each other, and often also because they’re asking me to focus on similar things – themes like equity, care, community, etc. online. Occasionally one will ask me to focus on faculty development (still equity and care theme!) and workshop invitations will often ask me to do some liberating structures.

In any case, one of the ways I try to insert something “new” into each of my sessions, is by trying to read new stuff, and sometimes, I try inviting people to participate in a Twitter conversation! Asking a thought-provoking question on Twitter can provide some really enriching keynote material. Mia Zamora and I had tried to invite Twitter responses to “What does Equity Unbound mean to you?” but we did not get a ton of responses. For another keynote (Media & Learning Conference), I had chosen a title of “Equity and Care for Students, Equity and Care for Teachers”, and this keynote was about a week after the Open Ed one… so I posted the Twitter question: What is care without equity? What is equity without care?

The responses to THIS one were amazing! It’s not so much in the number of responses (they were still a lot) but in the thoughtfulness of the responses, and what people came up with, how different they were, but also how they built on each other’s responses. So I made a slide deck that curate them all, which I am embedding below if you’d like to go through it.

So while Mia and I were talking about our own keynote, which also had themes of equity and care, we looked together at this Twitter thread (which neither of us actually contributed to, it was so rich that, to me, I don’t think I could have come up with something as smart as what folks here came up with! Seriously!) in the midst of our conversation we started to see patterns, but also different ways of looking at the same thing. For example, some people felt Equity without care was about “systemic” and “transformative” impact, such that people who did not care would not harm others (e.g. Donna Lanclos, Tanya Elias, Sukaina Walji); then again, other folks wondered if equity without care would be tokenism (Parisa Mehran), diversity theater (Sarah Lambert) or mechanical. On the other side of it, people felt care with out equity would either result in a lot of affective labor to make up for systemic inequality (Autumm Caines) or would be selective, “care for the few” (Catherine Cronin) (these ideas also by Tim Fawns and Martin Weller).

Mia and I shared this model in our OpenEd20 keynote, using these slides here: https://bit.ly/miaha . You can watch the recording – the explanation of the model is towards the beginning of the session, 10 minutes in:

I made a slight modification for my Media and Learning Conference session (slides at http://bit.ly/baliMandL)

Here is the model in its latest form, which hopefully Mia and I can publish in more detail soon:

This is still a work-in-progress, but someone recently was looking for this Twitter thread and found it useful, so I thought it made sense to publish it on my blog, along with narrating the process, so that it would be easier for folks to find it and reflect with me on the process. Feedback welcome on the process and the model itself.

I think there might be 2-3 factors that make a difference in the success of these Twitter threads.

Finally, I always tell people why I’m doing the tweet, and what I plan to do with responses, always promising attribution, and always trying to present their tweets as they are, for the most part, without too much modification, so that I don’t misquote someone.