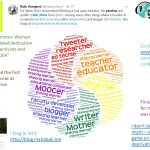 I used to have an Alternative CV… back when Sarah, Kevin and I created the activity for #DigiWriMo… but since then, Tackk (where I created it) has closed down and poof… it’s now gone. Which is just as well, so I had to create a new one and it has some things in common, but some quite different things… like the Uncommon Women coloring book 🙂

So I’ve posted it in my #ALTCV page under my portfolio (link to instructions for creating an #ALTCV here), but I’m also going to embed it here for faster access to #UnboundEq folks – so I’m doing this with my class and anyone else who’s following us for #UnboundEq introduction theme starting this week 🙂 (check out the kick-off post we just published)

I am using the new WordPress Gutenberg editor which I’m still not used to, so I had to actually struggle to find the html editor (called “code” editor… why???) from the three dots at the top right – to embed the code for that Google slide. It is annoying me so far, but it does have a cool little feature that makes it easier to move blocks of text around… still not finding anything else that is particularly impressive about it, though.