Autumm Caines (co-director of Virtually Connecting) recently wrote a reflective post, summarizing her thoughts after we conducted 3 online focus groups to explore inclusivity (or lack thereof) in Virtually Connecting. Read her post and the really insightful comments it’s getting (also great feedback on Twitter). The research started as part of a presentation we are doing at #OER17 inshallah (with Martin Weller, Sue Beckingham, Rebecca J. Hogue and Mia Zamora – and Autumm and me) but really turned into helpful exploratory data for VC strategic planning (this was unintentional but really helpful to start thinking about). I feel really proud of this particular research project and I feel we dug deep to listen to critique even though some of it was pretty hard to listen to.

I am nowhere near as ready to post my full reflections the way Autumm has. I was there in all three focus groups and took notes in the one I wasn’t facilitating…but I am still thinking of how I feel about it overall.

But I have a thought followed by a brainstorm to share. So I won’t wait on this 🙂

The term heterotopia intimidated me for a long time. Laura Gogia told me she called VC heterotopia before, but when I looked the term up before, I wasn’t sure what it meant, so I kind of let it slide, I think? But now, encouraged by Frances Bell, I made myself read this article by Lesley Gourlay Open education as a ‘heterotopia of desire’.

Heterotopia, as a Foucauldian concept, made me feel as I have felt about Foucault before. A lot of what he says doesn’t sound like rocket science to me, possibly because others have built on these ideas in ways more accessible to me. Or perhaps I just am not a fan of giving complex terms to simple(ish) ideas. Or maybe i don’t understand the depth of what he’s saying and this is a simplistic understanding of it. In any case, heterotopis are apparently spaces that compensate for shortcomings of the status quo (as quoted in Gourlay p. 316)

…their role is to create a space that is other, another real space, as perfect, as meticulous, as well arranged as ours is messy, ill constructed, and jumble. This latter type would be the heterotopia, not of illusion, but of compensation” (Foucault, 1967/1984)

Crucially, for Virtually Connecting, which challenges the way conferences currently reproduce privilege, is this point where Gourlay cites Foucault for how heterotopis may appear open but in reality “hide curious exclusions”. These hidden exclusions depend on all kinds of privilege/marginality. Yes. Yes. We knew this about VC. This came up a lot in our focus groups and are what Autumm is naming “paradoxes of inclusion”. If you’re too friendly (which appears welcoming and inclusive) you exclude some people. If you privilege conversation over content, you challenge the status quo that privileges content as broadcasting presentations but you replace it with a privileging of people, centering people (as stars? As community) as your draw to VC.

We thought a lot, I think, from these focus groups, over the question of “for whom do we VC?” and “for whose benefit do we VC?” and therefore “who should we care/strive to include?”. Because yeah. If you’re someone who gets to travel a lot to conferences and have a good network of people onsite, VC isn’t here to serve you, although you’re welcome to participate. VC is more here to serve those virtual folks who can’t go to these events often (while people at those events make it possible with giving their onsite time – out of generosity or love or enjoyment or…any other motive – the VC buddies put a lot of heart and work into it on either side). And if there are some people (whom we intend to address) we end up excluding unintentionally, we should care. Sure, some people don’t want to join sessions and prefer to watch online. That’s fine and apparently this is helpful to some people. Other people don’t like the informality and prefer to interact via Twitter or watch broadcasts of keynotes. That’s fine, as long as VC doesn’t get in their way, I see no problem there. There are other problems…which I won’t delve into right here… But the key point I feel is that there will be multiple hidden exclusions, some of which require our attention, and others that are less of a priority. I mean we don’t wanna annoy or infringe upon anyone’s comfort. But if someone is exactly the type of person VC exists for, and that person feels excluded for some reason, then we need to stop and take notice.

This made me think a lot about intersectionality and how almost any kind of open education, any kind of educational intervention or reform, is likely to benefit some group of people above others. It made me think of how each of these things, despite their imperfections, their hidden exclusions, may have merit in challenging the status quo. Just not universal merit or complete dismantling of privilege or status quo. And it made me think about local optimums. 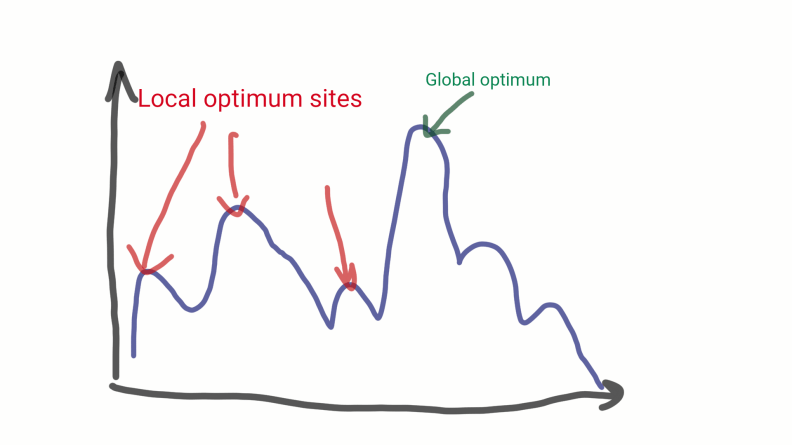 Figure above created by me, demonstrating concept of global and local optimum. In reality, most complex problems are multidimensional and that figure is just a simplified model. The general idea, though is this:

In mathematics and computer science, a local optimum is the best solution to a problem within a small neighborhood of possible solutions. This concept is in contrast to the global optimum, which is the optimal solution when every possible solution is considered. (source)

As a computer science undergraduate, I used this modeling to optimize algorithms for my neural networks (using a particular genetic algorithm, something called population-oriented simulated annealing, kind of an evolutionary theme). Sometimes, even though you could tell you were at an optimum beside the spots in your immediate surroundings, you needed to allow for occasional large jumps, lest you find a higher local optimum, or you find the global optimum.

Those are my messy thoughts for the day.

We're double-dating April at #OER17 & #OLCInnovate – if you're onsite and up for @VConnecting sign up here https://t.co/K91RKb873f #edtech

2 thoughts on “Contextualizing @Vconnecting – on heterotopia and local optimum”