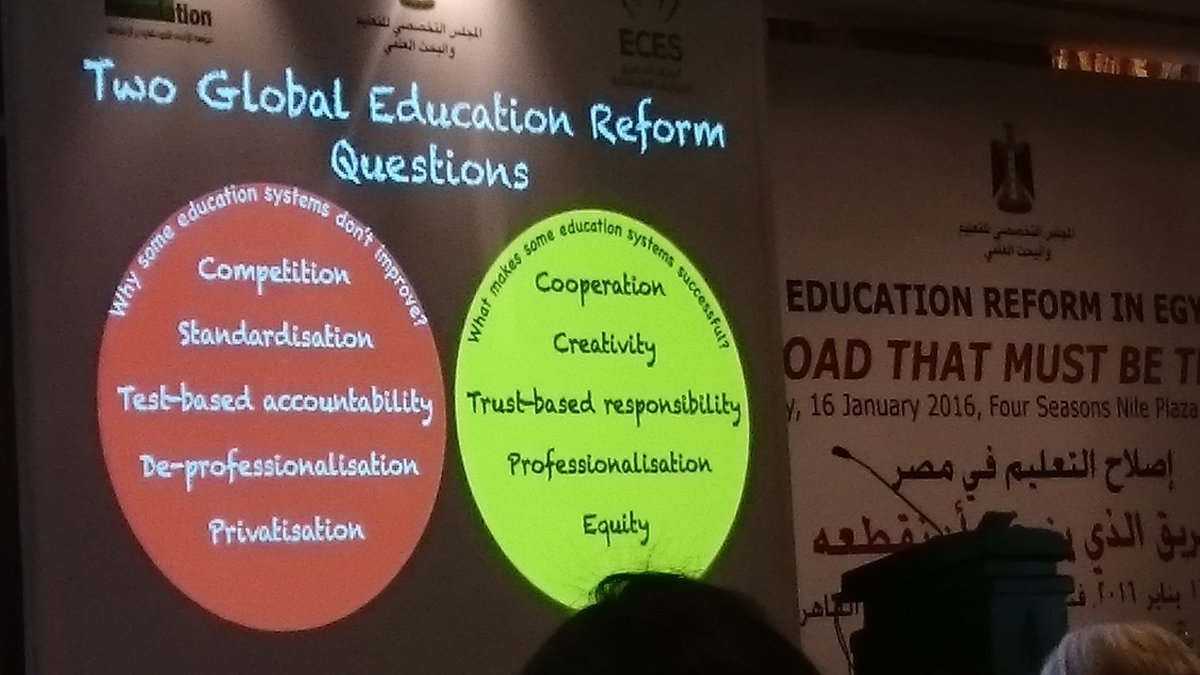 Yesterday I attended a one-day event on education reform in Egypt. It’s of course a tremendous topic, given how problemtatic education is in Egypt, and it’s difficult and frustrating to put so many people who know and genuinely care about education in a room, knowing that one day will never be enough and that the problems are too complex and multi-faceted to discuss deeply in one day. But it was still a good experience for me because

A. I was reminded how huge and complex Egypt’s education problems are. But also reminded who some of the key actors are and how easy it is to name the problems vs how difficult it is to actually solve them, or even get consensus about direction to solve them. There is so much happening in parallel and in divergent directions rather than a clear vision that goes beyond marginal improvement on the status quo

B. I networked a little. Most of the people I networked with were other young educators and that is a good thing. I am now considering opportunities for bringing together all these young educators and holding more focused discussion sessions and then figuring out how to get some of that to trickle up. My understanding is that yesterday’s event was like a start to a conversation and not the end of it (I had to leave early so missed quite a chunk of it)

C. Pasi Sahlberg was a great keynote. I kinda wasn’t expecting it to be as engaging as it turned out to be. I tweeted like crazy during his talk (storify below). It was an instance of a success of an international guest speaker who didn’t necessarily realize how controversial his speech is and so it was very satisfying for those of us on the more radical end of what education reform could/should look like. And possibly made policymakers cringe. Unless it totally went over their heads. For example he repeatedly said “don’t do what Finland did; do what would work for YOU” and people still continued to talk about copying snitches of the Finland model, often ignoring the emphasis on equity and trust in teachers in that model (possibly the main two “values” in it that are core and re-contextualizable).

Some of the things that continue to frustrate me with Pasi’s work (also had this problem with his book, Finnish Lessons) is why he continues to use PISA as the evidence of good education in Finland. It’s a standardized test. Even if it tested reading, math and science literacy accurately, it does not test the things he talked of as key to the purpose of education, namely supporting the child to grow into their potential and find their passion. Every time he says PISA it disappoints me. It’s looking at a (pretty narrow) outcome and making inferences about education quality. I know it’s probably true in Finland, that they have good quality, but it doesn’t tell me anything about what truly matters about education in Finland. It doesn’t tell me that actually good learning is happening in the classrooms. It just tells me about specific literacies, not the whole student.

The saddest thing for me in this event was that a lot of audience questions seem to have ignored the equity concept altogether, and that some people could not look beyond solutions into some kind of vision of the whole person. Some of the other comments were great, of course, and give me hope.

Terry Elliott did an Oracle thing with this post and others contributed short poems. I am linking to it here