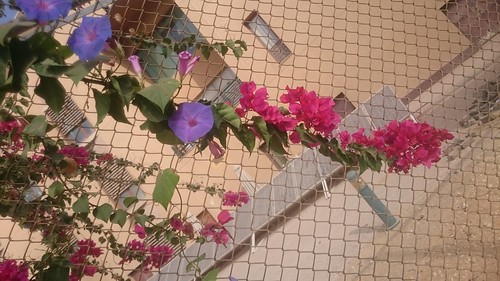 I don’t know if it’s clear looking at the above image what it is I’m showing. The dark pink flowers are part of a tree, they’re growing naturally, in their space. The purple flowers aren’t supposed to growing on the branches of the pink flowers – they are supposed to be some kind of climbing plant (sorry, I don’t know the proper names). It found a way to climb onto the other one. It’s not home. It’s not a parasite exactly, because it’s not taking too much away from the other flower, but it’s an impostor, or something, because it’s in a place it’s not supposed to be. It’s a flower on a climbing tree that belongs on a fence, not wrapped around the branch of a totally different tree.

You can look at the symbolism of this image and think…some kind of cross-cultural collaboration or serendipity. Or you can look at it and think about how it feels to find yourself an impostor in a certain context. I was thinking about the latter. If he flowers were alive the way animals are, it would be like the ugly duckling because it looks different from those surrounding it. What I absolutely HATE about the story of the ugly duckling is that, in the end, she turns out to be a beautiful swan, more beautiful than the ducks. Instead of learning to love herself for who she was, and finding others to love and appreciate her for what she was (different), her life only became better when she grew into something more beautiful and graceful than a duck… a swan, no less. She had to change (well not intentionally, but you get my meaning) to be accepted and to accept herself.

But it makes me think a lot about minorities and women in academia. I recently published two articles I am really proud of. The first is a call to global South scholars, a call to action on how to collectively amplify their voices globally. I wrote it in English for al-Fanar and recently heard an Egyptian newspaper would publish the Arabic version (yay! Now I’m worried it doesn’t address the non-English-speaking audience too well… but anyway). The second article addresses scholars in the US/West and how academia can become more permeable – to minorities, women, global South scholars. I cite the work of a lot of wonderful people who influenced my thinking on this (all linked in the two articles, including Laura Czerniewicz, April Hathcock, Rafranz Davis, Sara Ahmed, and the person inspiring me a lot these days, Ruha Benjamin). Because of these articles, people have been sharing interesting articles and their reflections with me, and I wanted to focus on two of those specifically.

Paul Prinsloo shared Fighting Equality with Silence, story of a man who stepped down from a panel on gender equity when he realized there were 3 men and one woman, and he gave up his spot for a woman – and eventually concedes the woman chosen was a better choice than himself. Interesting Facebook discussions ensued in which some really privileged people showed how clueless they are about their own privilege. Not surprised. (see also Doug Belshaw’s good post on Meritocracy). The other post is one by Aaron Davis, Is Gender the Elephant in the (Education) Room? Which is a really sensitive post on his struggles to make a difference on this issue. What follows is not a critique of Aaron’s post, but me picking on a particular sentence to illustrate a wider point. Aaron writes:

I think that it is important to encourage women to present when and where applicable, especially when it is only confidence holding them back.

Especially when it is ONLY confidence holding them back.

Now let’s unpack this. I think “only confidence holding” anyone back is a really big hole to dig. First of all, there are years and years of patriarchal societies that influence women’s confidence (and years of colonialism and postcolonial economic, political and social issues influencing the psyche of the postcolonial person; and needless to say continual systemic racism built on histories of racism impacting the psyche of people of color). Add to that daily microaggressions (being ignored, dismissed, belittled, stepped on) at work and home and everywhere and you have a situation where the fragility of confidence of a woman or POC is more like inevitable than occasional. Add to that other factors that enhance our impostor syndrome – like generally not seeing people who “look like us” as defaults in places of power. Or, say, panels or keynotes at conferences. The cumulative effects are… Huge.

And I say this as a really confident person here. I was more confident when I was younger and didn’t know better. Humility makes me less confident but I am still confident through my impostor syndrome. Other women are less lucky. I am fluently bilingual and can express myself eloquently in speech and writing. Others are less fortunate. I grew up with really supportive parents. Other people don’t have that. I grew up affluent. Others don’t have that. Think about intersectionality of a lot of academics who are women, or non-hetero or non-white or just non-default/dominant. Confidence is the least of our problems and only the symptom of our deeper problems.

Given all this. It’s not about encouraging women (or any subaltern group) to present because they don’t have confidence. A much more intentional effort needs to be made. To build their presence and confidence in academia by creating space for their voices to exist on THEIR OWN TERMS (hence the articles i just published). This is a much bigger paradigm shift than it seems.

But any small effort helps. Like Aaron writing a blogpost. Like Paul sharing that article and questioning himself, if he should do the same (I think that’s extremely generous of him given his intersectionality and he should advocate without necessarily letting go of spaces because he represents several minorities already). And even when a dominant person gets the mic/stage they can intentionally cite minority voices and amplify them. There are so many ways individual and institutional. I gave you some in those two articles. Happy to hear more

(added later coz i had forgotten)

It’s both a diversity and equity issue. Sometimes we forget the importance of the latter and how much harder it makes diversity possible.