So the basic idea of this approach to psychotherapy is that I think it focuses on actual behaviors and how to modify them, rather than simply understanding what’s behind your motivations for behaving a certain way. It seems more solution-oriented than analytical, though it is also analytical. This is my first impression.

In this blogpost, I’ll briefly explain my understanding of ego states and games, and then give some examples from personal life, classroom, and politics. I also have a critique 🙂

These are my own personal reflections based on rudimentary understandings and if you are a psychiatrist, psychoterapist or psychologist, please feel free to correct me. I’ve been reflecting even more, but cannot share everything here as it relates to relationships with other folks in my life :)) One of the things I’ve heard Berne say people read about ego states and either react by saying “oh, that’s me” or “oh, that’s you”… I read about it and thought, “oh, that’s US”. That is how you and me (where you is everyone in my life, really, with different folks in different situations). Which I think is a normal reaction, too, right?

I’ve read ego states referred to as family therapy for the individual. I find that interesting – how can you change an entire family’s dynamics by working on one person?? But perhaps that’s not what is meant. Rather, it’s that ego states understands each person as having 3 ego states: parent, adult and child. All within the same person, and each one comes out at different times. There is more explanation on each state (this work extends Freud’s id, ego and superego and imho is more accessible and relatable to everyday relatively normal life):

On Parenting and Bener’s Games

I found this quote from here particularly helpful:
“when you are talking to someone, you are actually in conversation with three different ego states. This helps to explain why people aren’t always predictable.”

And totally. I totally see myself switching between these ego states with my daughter. One minute I am nurturing, it doesn’t work, so I try being free child with her, to which she responds well, but doesn’t do what we need to get done, so I go back to nurturing, then she says something that triggers me and I turn into critical/controlling parent, shouting or threatening punishment – but this usually results in her rebellion rather than compliance (and in all honesty, I worry about compliance, but I guess no one can be free child in every context, and she’s too young to respond as an adult). My punishments are silly, and anger shortlived, and I eventually go back to the nurturing or free child mode.

The “games” Berne mentions are sequences of conversations or situations where people move between ego states. The example I read is a common one with the two games NIGYSOB (Now I got you, SOB) and Kick Me.

In such a situation, a more constructive behavior would be to give the kid a broom to suggest they clean up their mess. Pretending mom does not know who did it helps no one. Lying helps no one. Anger helps no one. But learning to fix it helps everyone. Kid takes responsibility, mom doesn’t end up cleaning.

On Classroom and Ego States

I bet K-12 classroom managment situations can be easily related to these ego states.

But in higher ed, it is a more clear situation where faculty are always toggling between when they should be critical/controlling, when to be nurturing, and when to be adult and treat students as adults not kids.

It is interesting how compliance and rebellion are both around the same state. I can’t figure out how to expect one or the other.. I guess some people are more likely to rebel or comply to certain triggers or people. Like certain things trigger certain reactions? And it matters who is doing them? My response to critique from my mom is different from someone else’s. But it’s also a thing that parents keep wanting their adult children to comply… but when we rebel, that’s still a child response.

But I also see how being a parent to a young child has brought out the free child, not only in me aand my husband, but also in our moms. As grandparents, they are more fun (free child) and nurturing parent with their grandkids than they were with us as kids, when they had to sometimes also be critical/controlling parents.

I can now make a connection to politics. When authoritarian regimes behave, they can so as critical/controlling parents or as nurturing parents (usually a guise, though, right?). And the population are either compliant or rebellious… but when they rebel, they are not then mature enough to be adult once they are freed from the controlling parent. I don’t know if this makes sense or if this theory was meant to be applied in this way. 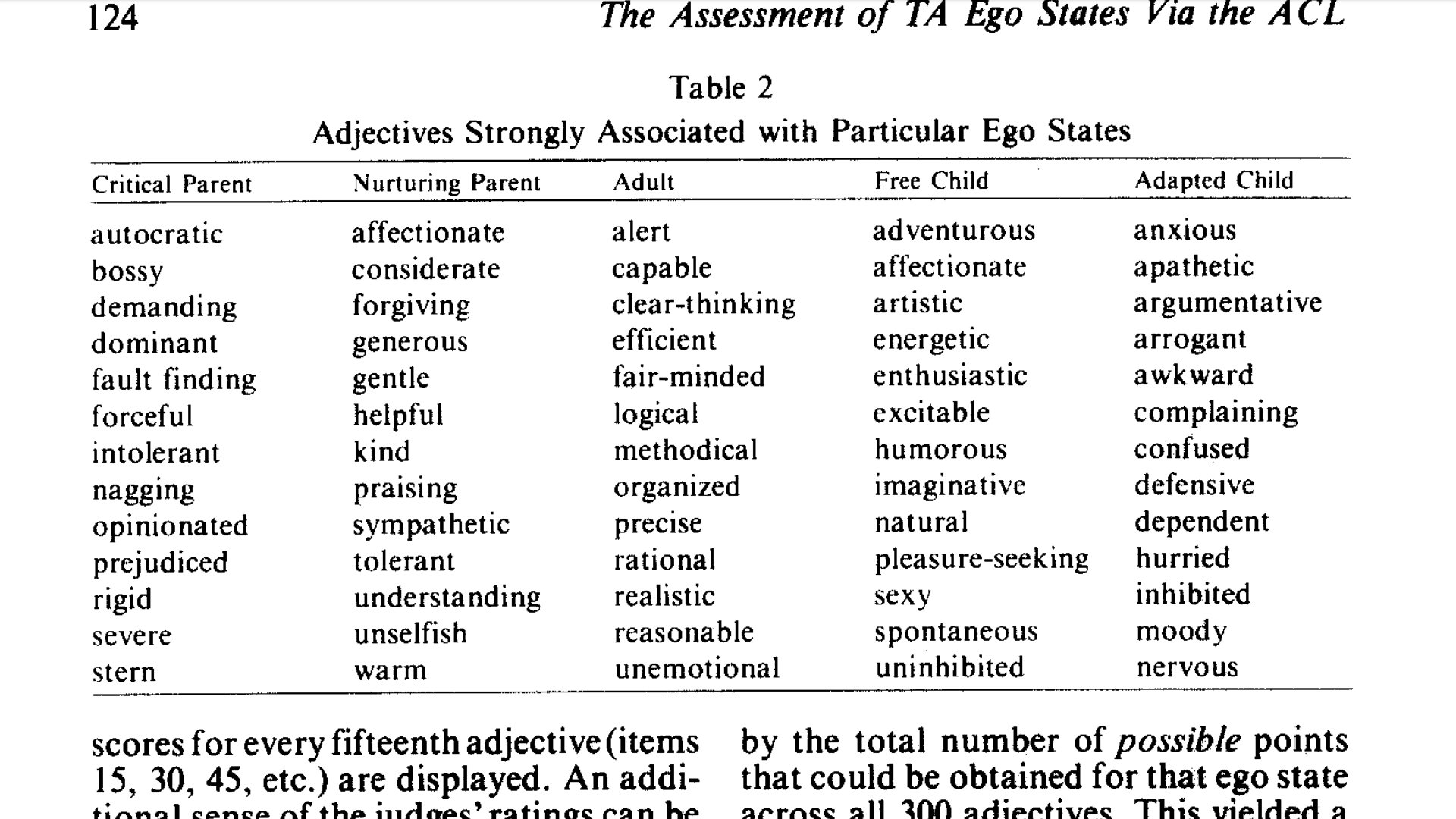 I need to stop now, but I may write more later…