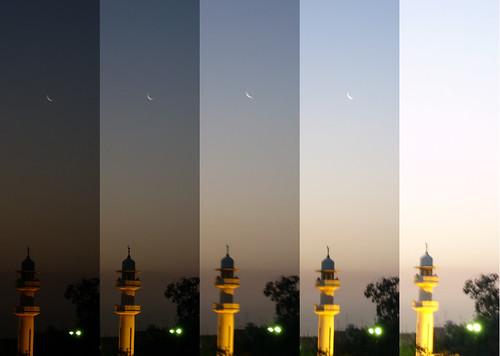 I almost called this post “What Does God Look Like?” but I realized it’s neither about God per se, nor at all about what He looks like. God is a being that is external to us. Faith is something inside of us. They’re interrelated, but I know a lot of people who have “faith” but who do not have “faith” (as in following God or religion).

So… a tangent on what God looks like. My little one was looking through some of my old Encyclopedia type books, at one called “Dean’s Big Book of Answers” (similar to the Tell Me Why series) and she opened up the page on God and Adam and Eve. I should go read it and figure out why the heck the story of creation made it to a book on, supposedly, science and stuff. But this was the 80s and I’m not sure where people were on that front. But anyway, the picture was a very Christian interpretation of God’s likeness (old man in a beard, overseeing everything) and Adam and Eve (nudes). Not at all the Islamic interpretation. First, because in Islam we don’t EVER try to visualize God. He’s got characteristics similar to humans but he is not human. In the Quran we learn “there is nothing like Him”. Makes sense to me. I mean, if God were just a super-powerful human being it would all be… uhh…. Ok let me not go there because it might actually offend people of certain faiths which isn’t my point or intention here. My point is that even though I was never allowed to visualize God, I still remember having a visual representation of God. It probably dates back to how I was first introduced to God, and it was probably something hanging on our wall at home, some Quranic text written in a particular way (calligraphy is the ultimate Islamic art, imho) and for some reason, my picture of God was that shape of calligraphy, superimposed onto a sky, because we always think of God as being in the sky somehow, right? We are also not supposed to visualize prophets and such, no Jesus or Mary paintings or statues for us. Definitely not Mohammad’s. But I also had an image of Mohammad. It was simply the first adult I knew who had that name. This sounds particularly tricky, because what if he was a horrible human being? I didn’t know him well. He was actually a red-head and very fair-skinned (as most redheads are) and someone who lived in our compound, and I don’t think I ever heard or saw him do anything but ride elevators with his family.

Anyway. Now to the real point of this post. What is faith?

I’m gonna go back in history for this one. Back in 2011, shortly after the revolution happened, while I was around 2 months pregnant, I had a horrible dream. I don’t want to say exactly what happened in that dream, but suffice to say that when my parents were in a car accident a few days later and my dad injured his hip (but my mom and driver were unharmed) – I was RELIEVED. I felt that my dream prophesized that something horrible would happen, and that my dream was an exaggeration of what would happen, so that I would feel really calm when the real thing happened. When people asked me about the accident, I would say, “it could have been so much worse – they could have both been hurt, he could have been hurt worse… you know, someone could have died”. Funny thing, that. My dad died 3 months later. And it was a surprise because it was only indirectly related to the aftereffects of that accident. So the dream? That hadn’t been an exaggeration. That had been the preparation. And the accident? That had been (in my humble opinion) God’s mercy in letting us down gently… of giving everyone an opportunity to give my dad some love and attention in his last days, without knowing they were his last days.  I was pregnant and had my own problems (coming up) but because my dad was not completely well, I spent a lot of time with him in the last few months of his life. And I am forever grateful I had that opportunity.

The horrible things that happened to me while pregnant. I can’t divulge details, but sometime between my dad’s accident and his death, something pretty horrible started happening in my life. After spending a night bawling my eyes out and falling asleep from exhaustion, I had this dream: I dreamt that I was bleeding, and that in my dream, my mom was comforting me and telling me not to worry, that bleeding early in the third trimester is normal and not necessarily a sign of miscarriage. You have to realize two things here: while the latter piece of information turns out to actually be true, I did NOT know it at the time. And second: this was a REALLY precious baby. We’d been married 5 years and tried all kinds of fertility support and (as is statistically probable) we did not get pregnant after our first IVF. So this was a precious baby and losing it was a big deal. I woke up and thought, that dream is just my subconscious telling me that I’m really worried and scared of losing something precious. But you know what happened after that? A few days later, around one day after I announced that I was now in my third trimester, I woke up one day to find myself bleeding really heavily. I was at home and about to go to work, and I canceled. My mom was on her way to work and I called her to come back home. I called several people who could help (my husband was not available at the time) but through it all I remembered my dream. I calmed down and talked to God. And I thought, that dream, that’s the only reason I’m calm right now. And it turns out that, really, it’s normal to bleed during the third trimester and retain the baby. It’s so normal that when it happened to me so many people told me it had happened to them. Now why doesn’t anyone tell you that BEFORE it happens to you?

There are so many other dreams that happened to me like that… and I don’t know what people believe about dreams. But those two stand out more than any others. Especially the second one because it was not even symbolic: it was literally accurate. My mom (a physician) and my uncle and his wife (gynecologists) told me the same scientific fact I had dreamt about subconsciously, but only after it actually HAPPENED to me.

In another sense. I think that I’ve always paid attention to medical information for a reason. To help someone else or to help myself. When my child was diagnosed with her congenital illness. It was relatively new to me, but because I was able to find out more about it, I was able to be grateful that what she had could have been so much worse. That what she had was completely manageable for us (maybe something else would have been more manageable for other people). That even though I knew it would get worse, I was prepared for it in some way. No dreams in this one. Just some kind of inner calm that settled on me while all of the process of diagnosis was happening. I was stressed out, but I wasn’t freaking out. And that makes all the difference to me. In the moment.

This week I went through something similar. A shocking medical situation for a loved one. And I was somehow calm. I observed, I imagined a diagnosis (and some differential ones). I called my husband (a doctor) and others. Went to hospital. Stayed calm as doctors tried a lot of different tests to confirm a diagnosis that was 90% obvious (imho) straight away. Watched things get worse before they got better. And panicked a little, but not a lot. Not a single tear. Because… I knew it could have been even worse. I knew it could get better when other things could not. I knew I just needed to be there and to do my best to stay in the moment and calm. I drew on experiences of friends who knew loved ones suffering similar, and learned along the way, even more than I had previously known, that we were lucky with this one. Oh so lucky. And so even though I wouldn’t want those moments to happen again, even though I’d rather erase them altogether, I’m grateful for where we’re at now. It could have been so much worse. And it isn’t. And you know what? I’ve always had a nagging feeling that something horrible could happen to someone dear if I traveled (ok, I probably have that always – if you think about it you go crazy) – I realize I was supposed to be traveling to Dubai today, and I might have missed being here for this entire thing… and I’m grateful I was here when it happened.

In Islam there’s a prayer where we say “Oh God, we don’t ask you to prevent fate, but we ask you mercy/gentleness in bringing it” (my own translation). And I think that is absolutely my life, even though I don’t literally say that prayer that often. There is also a verse in the Quran that says “God does not impose on any soul a responsibility beyond its ability” (2:286 – Muhammad Sarwar translation). And that’s so so much my experience. When people have a deep look at the kinds of things I struggle with in my life, they may seem like a lot for some people. But for me, I often have the sense that, it could have been worse. It could have been something I could not deal with. All of this, I can deal with.

I don’t know if that’s faith. This inner peace through stressful times. But I’m grateful I had it this week. And that difficult year of 2011.